A couple weeks ago, my four fennel plants were getting stripped of leaves.  Hubby mentioned it, and asked if I wanted him to pull the culprits off and feed them to the chickens.  I said, "No!"  Not only do the chickens not like the taste of them, they weren't hornworms but swallowtail caterpillars.  Tuesday morning, as we were feeding the chickens and rabbits, the butterflies were emerging from their cocoons.  This has happened before, but this time we got pictures when one of the butterflies stayed on my hand as I was moving them up high enough the cats couldn't reach them while they waited for their wings to dry.

Now, for a bit of interesting news ... I finally signed up for a Facebook account here.  It's strictly for business - critter stuff and art - no I won't be doing memes and definitely will not be acknowledging politics or currents events there.  Just my critters and my art, for anyone who wants to follow along on that (and has an account).

Email ThisBlogThis!Share to TwitterShare to FacebookShare to Pinterest
Labels: wildlife


A big picture dump of this spring's goat kids.  First were Cocoa Puff's twins, Stinker and Star.  I've had a buyer since December wanting two *boys* for pets, so of course the Chaos Puff had twins girls.  Star was an obvious name ... Stinker earned hers by bouncing off my back and shoulder any time I paid any attention to her sister.  It hit me the other week, when Stinker laid her head on my lap while I was trying to bottle Karl and Hope (and Stinker was trying to steal one or other bottle) that Stinker really, really wants constant attention.  She isn't going to be picky about what kind of attention, just as long as she is the center of my attention, and her alone.  If she ever calms down, she'd probably make an excellent pet.

Four weeks after Puff's twins, Molly had triplets again this year.  She rejected her firstborn, and it took me a day to figure that out because she has been the doting mother every other year.  As I like to do, I was there midwifing for her, and she no sooner jumped to her feet after Karl was born than the next contraction hit and she laid right back down.  I pulled little Karl out of the way and dried him off , then did the same for Franklin although she had time to catch her breath and start cleaning Franklin before Maude was ready for her debut.  Molly did NOT get a chance to clean Karl off - I did all that for her.  I was just helping, ya know ... she has only one tongue but is on her third set of triplets.  Well, it took until the next day for me to figure it out - Molly has to do at least a little of the clean-off, or she thinks, "Not my kid."  I'll need to remember that next year.

So, I finally had the two boys for my buyers.  I called them even before showering after the triplets were born, and they were eager to come out and see them, name them, and put a deposit on them ... before the state of Florida decided to do a lockdown (or, if you prefer the euphemisms like "shelter-in-place" or "stay at home order").  When the boys turned four weeks old the other weekend, the lady called to say they could take the boys once they went down to three a day bottlings.  That was this past Sunday.  I'm not sure who was more excited - the lady or her son - but each will have a pet goat.  Franklin resisted the bottle for a week, then on the eighth day he converted and began pushing Karl off the bottle every chance he got.  With Puff's twins, I sort-of gave up after six days ... now I know to go at least eight.  Franklin really was trying to prove the truth to the expression, "as stubborn as a goat."  Hmphf, I *am* a Capricorn though.

Now, the saga of Madison, and her one live twin Hope.  Madison wasn't due until two weeks after Molly kidded, but when the triplets were only three days old, she went into labor.  The little girl who ended up named Hope was first born, and not too hard of a delivery, although Hope could not even try to stand until later that night (born in the late morning).  The second twin, though ... oof.  At first I thought it was breech, but then realized that was a single fore foot.  I tried to push it back in to reposition, but Madison's contractions were just too strong.  I did move it enough for her to push it out ... dead.  With its head turned back to touch its hip, the other foreleg tucked under the body along with both hind legs, it was in the yoga-position-from-hell as far as birth presentations go.  I don't know if it died in utero or if it snapped its neck in the birth canal, but it didn't even twitch.

We put Madison in the small pen to recuperate by herself, and put the surviving kid in a cardboard box so I could look up what to do about a premie and try to get warm milk into her.  I had told hubby that night, "If she survives to morning, I am going to name her Hope."  Well, as you can see from the pictures, Hope was indeed still alive the next morning, and able to stand a little longer than the night before.  Huzzah!  Madison seemed to improve, even getting herself tangled in the electronet fence at least once, but her milk production was next to nonexistent so Grandma Molly to the rescue.

Then, the afternoon of the fourth day, Madison seemed a bit lethargic.  By evening, she was laying down mostly, and we both had a bad feeling ... which was confirmed the next morning when we found Madison dead.  Oof.  This was only the second goat I've lost (Chocolate was the first the other year, and for almost the same reason) and also the first bottle baby I've lost.  Francis, Madison's sister and also a bottle baby from last spring, doesn't seem pregnant even though she was bred ... and I am not upset by that.  Right now, both Molly and Cocoa Puff are giving a lot of milk - I brought in about a gallon and half this morning! - so I feel no urgency to rebreed Francis.  Maybe ... just maybe ... Prim might finally be pregnant again, after having milked for 34 months and drying off this December.  Maybe she's just fat and sassy on spring grass (well, she's always a bit sassy) but her udder has not gone all the way down and may - just may - be starting to gear back up.

Well, this has turned into quite the long update, but there has been a lot of stuff going on here.  For the record, bottling a rejected kid and an orphan kid takes up a LOT of time, especially the first week when their tiny tummies only hold about three hours' worth of milk.  Today, Hope is officially four weeks old and can now go down to only three bottles a day.
Posted by warhead01 at 12:20 No comments:

The storm has passed

We still have both power and internet!  It's still windy, but the rain may be over for now.  Thankfully, it was not as bad as Michael or Irma ... not by a long shot.  We may have one small tree down in the back of the pasture, but that's it.

Words of wisdom from the storm prep this time: "There is just no reasoning with a broody hen."  If she still wants to sit a nest tomorrow, I will let her.
Posted by dfr2010 at 10:53 No comments:

Just a quick note here to let everyone know we did our hurricane preps Tuesday and Wednesday, before it was even upgraded to hurricane status.  With it slowing down and now not expected to make landfall until Tuesday, I may need to get more chocolate chip cookies before it hits.
Posted by dfr2010 at 07:26 No comments:

Email ThisBlogThis!Share to TwitterShare to FacebookShare to Pinterest
Labels: misc

Goats for sale and progress bottling the keeper girls

First up, a short progress report on bottling Molly's two daughters, who will be two weeks old Wednesday.  I'm not entirely sure which girl was born first, but Madison (as in Dolly Madison), the girl with the smaller white spot on her forehead, took to the bottle almost immediately, and yesterday took down at least 8 of 9 ounces in the big bottle, plus squabbling for a teat once I let Molly into the pen.  The other girl, whom I originally was going to name Flanders (as in Moll Flanders) but looks more like a Francis (like Baby in Dirty Dancing), finally got a good latch-on this morning and chugged half the big bottle on her own.  So, two bottle babies out of three!  And as Meatloaf sang, "Two outta Three Ain't Bad," especially since these are the first of Molly's kids I've ever gotten on the bottle.  The boy, Pitcher (as in Molly Pitcher) is still not sure about the bottle idea, but I hope to change that the next few mornings.

Because my pasture will only support six adult goats in a dry year, keeping Molly's two daughters means I will need to sell two of the adult herd.  So far, I've decided on selling Tangie, the pretty girl who tends to have singles, but also has the temperament to make a good pet.

I'll be taking sales pages up for each to TSC in Palatka today when we do the feed run.
Posted by warhead01 at 06:36 No comments:

Another set of triplets from Molly

Molly finally kidded last week on Wednesday (the 3rd), wrapping up this year's kidding season in fine style with healthy, good-sized triplets.  The first two were girls, as I had told Molly before taking her to be bred that I would very much like two daughters from her and Harry.  I was beginning to wonder if there were only the two when Molly laid down and delivered the boy.  According to one of my goat books, this is unusual, as "95% of the time" when both genders are in a kidding, the boys will be born first.  All three are horned, which means I need to fire up the disbudding iron, and hope I do a better job than I did with Cocoa Puff.  I'm working on switching them over to the bottle, as bottle babies are so much friendlier.  The punchline here is, after over 7 weeks of refusing, yesterday morning Cocoa Puff's daughter Cinnabon decided she wanted to try the bottle.

A picture a week of a garden box 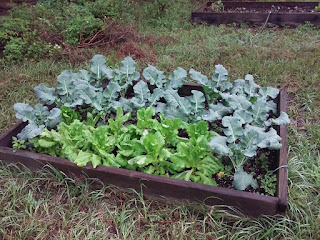 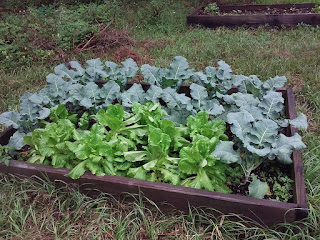 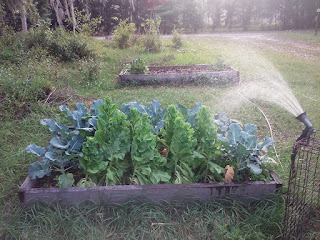 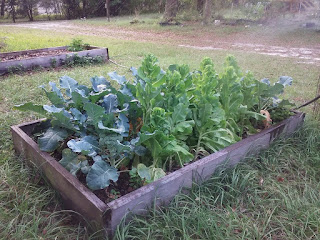 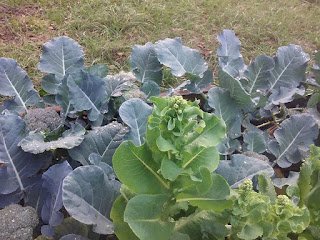 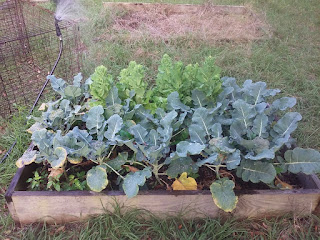 Just hubby's weekly pictures of the lettuce and broccoli bed, with the last three being the most recent, where you can see the lettuce bolted, although not before we got several good salads out of it.  The broccoli has sort-of bolted, in that right now there are only three crowns not yet past eating stage.  They should all do side shoots in good style, though, so all is not lost.
Posted by warhead01 at 09:16 No comments: